Rajasthan: According to National Centre for Disease Control (NCDC), a total of 1,652 cases of swine flu recorded in Rajasthan and 164 deaths occured this year. After Rajasthan, 1,167 positive swine flu cases were recorded in Maharashtra.

Maharashtra: Latest report of the state health department has revealed that, 56 people succumbed to swine flu in Maharashtra till October 11, taking the state’s H1N1 death count to 216 this year so far. The condition of 51 patients is currently critical and they have been put on ventilator support at different hospitals across the state. “Of these, maximum 35 are undergoing treatment at various hospitals in Pune city alone,” a health official said.

Karnataka: Almost 456 people have tested positive for the H1N1 and 5 people have died due to the flu since January 2018. Karnataka’s neighbouring state, Telangana, also recorded 50 swine flu cases recently.

Telangana: The frequent fluctuation in temperatures over the last two weeks resulted in rise of H1N1 virus. And also resulted in significant increase in the count of influenza, dengue, malaria and viral fever patients across Telangana. 11 deaths were reported in the State so far this year. From Hyderabad alone, 6 deaths have been reported in last 15 days.

AndhraPradesh: 27 cases registered across the State in October. All government hospitals were equipped with necessary medicines and special wards were set up. Attention is focused on Vijayawada, Viskhapatnam and Chittoor cities which are frequented by people from other States. Swine flu testing centres are established at the airports in these three cities.

TamilNadu: After Maharastra, Karnataka and Andhra Pradesh, swine flu has also surfaced in Tamil Nadu with 5 cases confirmed so far. The state government however said there was no need to worry as all necessary precautions were being taken to prevent its spread.

Symptoms of Swine Flu and How to Prevent it 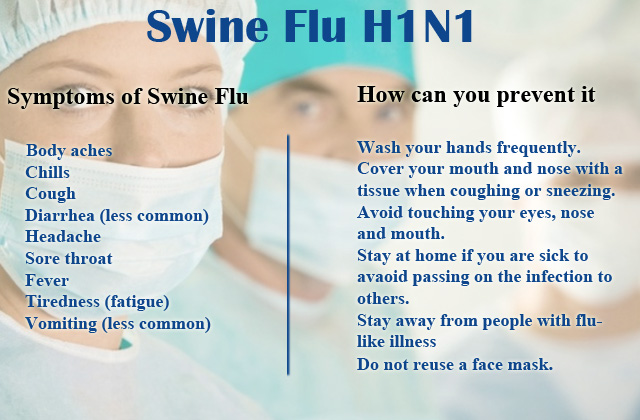